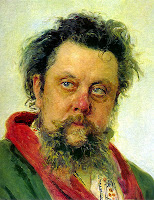 This is our modest pick for Tuesday, a picture of the Russian composer Modest Mussorgsky (1839-1881), along with the typo Pictues. Mussorgsky is best known for a piano suite called Pictures at an Exhibition, a title that would almost suggest the artist might have had synesthesia. I don't suppose that he actually did, but he did suffer from an acute case of dipsomania. Alcohol was practically de rigueur in the circles the young pianist ran in, but it eventually did him in at an early age. Mussorgsky was considered crude and unpolished by many of his contemporaries, an "idiot" by some and a "genius" by others. But for all of his creativity and originality, Mussorgsky was hobbled by poor technique and inadequate training. Although he had been born into an aristocratic family with a princely lineage, the struggling composer ended up a laid-off civil servant with a drinking problem. His reputation, however, has improved with age. Pictures at an Exhibition was included on two albums (1971 and 2008) by Emerson, Lake & Palmer; and A Night on Bald Mountain appeared in both Fantasia and The Wizard of Oz. We found 21 examples of today's typo in OhioLINK, and 108 in WorldCat.

(Detail from Ilya Repin's celebrated portrait of Mussorgsky, painted 2–5 March 1881, only a few days before the composer's death, from Wikimedia Commons.)