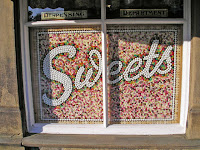 Tomorrow is "Sweetest Day," observed in certain areas of the Northeast and Great Lakes region, though gradually spreading to other parts of the country. Sweetest Day was begun in Cleveland, Ohio, in 1922. It's like a rather more amorphous Valentine's Day, with a hint of Halloween, historically manifesting as candy-coated alms for the poor, as well as "the sick, aged and orphaned." Along with, assures Retail Confectioners International, pretty much anyone else whose day you'd like to sweeten. It's also sort of a role reversing day for women, who tend to be the ones giving candy to their husbands and boyfriends, as well as to freely indulging children. It all started with a philanthropist and candy company employee named Herbert Birch Kingston, who "wanted to bring happiness into the lives of orphans, shut-ins and others who were forgotten," according to the website Sweetest Day History and Facts. Some fed-up Clevelanders, however, would like to put an end to this "concocted" celebration, which they scorn as a "Hallmark holiday," despite the fact that it was not originally connected in any way with the greeting-card company. (Hallmark has, however, jumped on the candy bandwagon, as has American Greetings.) Tomorrow, residents of Cleveland will be cleaving over the question of just "how sweet it is." Today's typo occurred six times in OhioLINK, and 55 times in WorldCat.

(Window of the Dalesman Café Tearooms and Sweet Emporium advertising some of the wares on sale, from Wikimedia Commons.)