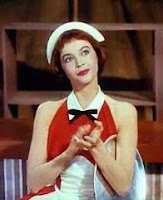 I caught the charming 1953 film Lili the other day and was reminded of the way my mother used to steer me toward this darkly romantic tale as a child, along with other works by Paul Gallico like The Snow Goose. Lili was based on a story called "The Man Who Hated People," which had been published in the Saturday Evening Post in 1950. Gallico was widely considered to be a very affecting, even sentimental, writer (Wikipedia states that "a public library puts [The Snow Goose] on a list of 'tearjerkers'"), but he also had his followers among critics of serious literature. Gallico did not eschew the "sentimental" tag, in any case, opining that, when it came to "the contest between sentiment and slime": "Sentiment remains so far out in front, as it always has and always will among ordinary humans, that the calamity-howlers and porn merchants have to increase the decibels of their lamentations, the hideousness of their violence, and the mountainous piles of their filth to keep in the race at all.'" There were 164 hits on today's combined personal-name typo in OhioLINK, the first ten or so clearly being typos. But never say never: the children's poetry book I Never Did That Before is written by Lilian Moore, but illustrated by Lillian Hoban. Leslie Caron sings "Hi-Lili, Hi-Lili, Hi-Lo" in the movie under discussion above, which prompts me to point out that this one is a typo of "highest" probability on the Ballard list.

(Cropped screenshot of Leslie Caron from the trailer for the film Lili.)