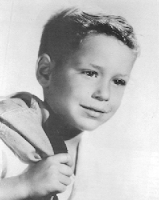 Larry Mathews, account executive, part-time actor, and 1976 UCLA graduate, is probably best known as "Ritchie Petrie" from The Dick Van Dyke Show, which aired on CBS from 1961 to 1966. In one episode, Larry lent his first name to a large unruly dog, the visiting pet of Buddy Sorrell. A rambunctious "Larry" drove a nervous Ritchie to barricade himself inside a kitchen cabinet, crying: "Don't let him eat me!" "He may not be the smartest boy in class," his beaming folks once confessed, "but he's the cutest." Ritchie's middle name, in an amusing nod to Orson Wells, is "Rosebud" (an acronym for seven of his male relatives). The genuine affection for each other felt by Larry Mathews and his TV parents was plainly apparent on the show. In another episode, a desperate Laura dyes her hair blonde because she thinks her husband has grown bored with her. Later Ritchie asks his dad if "Mommy's hair is gonna be brown again." "It certainly is," says Rob. "That's good!" replies Ritchie. "Oh, you think Mama's prettier with brown hair too?" "No, I think she's prettier with yellow." "You do?" says Rob." "Then why are you so happy about her turning brown again?" "Because I don't want her to look prettier," says Ritchie. "I want her to look like Mommy!" Some people are smart, some are cute, some are blonde, and some brunette. Some people spell their name Mathews, while others spell it Matthews. But everybody, as they say, wants their name spelled right. There were 135 cases of today's typo in OhioLINK and 1251 in WorldCat. And here are six "little known facts" about The Dick Van Dyke Show.

(Studio shot of Larry Mathews, from the Web.)