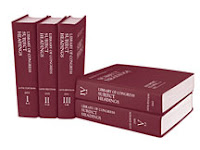 "Literary warrant” is a term that many librarians—particularly catalogers—will recognize immediately. Basically, it means that subject terminology should derive from existing literature on a given topic, rather than from a preconceived conceptual framework. Literary warrant underpins much of Library of Congress practice today.

What most of us probably don’t know is that the notion of literary warrant came from the writings of E. Wyndham Hulme (1859-1954), a librarian working at the British Patent Office in the early part of this century. (An interesting article about Hulme’s work can be found in the journal Cataloging & Classification Quarterly, v. 5, no. 1, 1984.) The concept of literary warrant was quite forward-thinking for its time, but some librarians maintain it is no longer adequate for our current information environment. Instead, they argue “user warrant” is an equally important basis for subject vocabulary.

Warrent occurs 20 times in OhioLINK , so it’s a lot more prevalent than its low-probability status would suggest. I warrant you’ll want to investigate your own catalog for this typo.