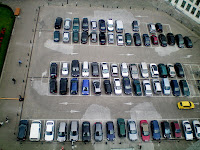 I remember that, in my earliest years of elementary school, I was taught “never walk between parked cars.” But my sister, who is three years younger, has no such recollection. It’s unlikely this important lesson was dropped from the curriculum at our school, so can it be that my memory is simply better? I’d like to think so, but she would probably just claim “I was absent that day.” Such was the title of an entertaining piece that appeared on National Public Radio back in July. Correspondent Linton Weeks reported (in part) on the more than 4,000 responses NPR received after asking Facebook Friends to “tell us about something you were embarrassed to learn as an adult that you should have learned much earlier.”

Bewteen has clearly gained momentum since its entrée to the low-probability section of the Ballard list. There are presently 19 English-language entries for this typo in OhioLINK, so don’t be embarrassed if your catalog has some too.