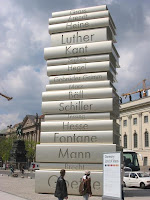 Perhaps I should have led with the story of the sinking library yesterday—rather than sandwiching it in between Bill Maher and Nick Baker—since it seems that there's more to this architectural anecdote than meets the eye. It's a story that really has legs. According to Snopes (the "myth busters" of dubious forwarded mass emails), "That Sinking Feeling" is a persistent urban legend dating back to the 1970s. Many libraries, including those at Amherst College in Massachusetts, Indiana University at Bloomington, Canada's University of Calgary and the U. of Waterloo, even the Vatican, have been subject to this myth. But the one thing they all have in common is the clueless architect who forgot to account for the "weight of the books." It's an interesting fantasy, which Snopes suggests may be a "metaphor for the crushing weight of the knowledge students are expected to absorb." Or you may prefer the "more straightforward interpretation (fellow who is supposed to be so smart forgets something blindingly obvious, thus allowing us lesser souls to experience a moment of self-congratulation)." In either event, as Barney Stinson on How I Met Your Mother would undoubtedly say: "Legen ... wait for it ... dary!" We may feel that our libraries are sinking under the pressure of budgetary cutbacks or technological advances or what have you, but few librarians are currently complaining of too many books. Unlike the online stuff, books possess a weightiness that most of us still enjoy having on our hands. Although, occasionally, some of them have to go. In a parody of this particular urban myth, Barbara Mikkelson once wrote about the opposite situation: a library that began to rise after some of its outdated books were removed from the collection. Here's hoping that books of all sorts do not become the stuff of legend, nor mark the end of libraries. There were five copies of today's typo in OhioLINK, and 45 in WorldCat.

("Modern Book Printing," the fourth of six sculptures in the Berliner Walk of Ideas, unveiled 21 April 2006 at Bebelplatz near Humboldt University, to commemorate Johannes Gutenberg, from Wikimedia Commons.)