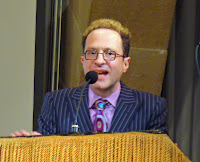 Last night the author Wayne Koestenbaum spoke about his most recent book at the New York State Writers Institute in Albany. I am embarrassed to admit (if not quite humiliated) that I was utterly unfamiliar with Koestenbaum and his work, except for a recent spate of advice columns on Salon. But I was so impressed with his kind and courteous manner, as well as the enthusiasm of the crowd and the great reviews his books have gotten, that I'm looking forward now to reading Humiliation: Big Ideas/Small Books, as well as perhaps The Queen's Throat: Opera, Homosexuality, and the Mystery of Desire (1993) and Jackie Under My Skin: Interpreting an Icon (1995). Among the numerous humiliation anecdotes the author shared with us, my favorite concerned his short tenure as a high school English teacher. One of his charges was widely considered the worst student in the school, but despite the roughness with which he handled the language, he turned out to be the teacher's favorite. One assignment he handed in told of how he had been at the grocery store one day with his mother when she angrily pulled him by the ear. The store owner observed this and out of sympathy for the boy gave him a lemon. Koestenbaum found the story both symbolic and "minimalist" and told his student so. Years later, the young man came upon a mention of his now-published former teacher and wrote him a letter. Much good, it seems, was generated from that single act of humiliation. If life hands you a lemon, make lemonade ... or, better yet, write a short story about it, or a letter to your old English teacher! We exposed 18 cases of Humilat* in OhioLINK (15 of which appeared on older records and could be a variant spelling) and 120 in WorldCat.