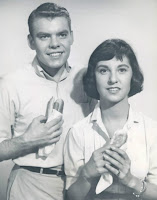 Yesterday I wrote about the various meanings of the word lousy and then later experienced this ambiguity in comic form by way of an old episode of The Mary Tyler Moore Show. Ted is fake-consoling Murray for having produced only daughters and tells him that some men just don't have enough Y-chromosomes in their sperm to make boys. Ted's pretty sure, though, that he's not one of them. "I'm lousy with Y's," he brags. "Or even without them," Murray notes wryly. MeTV is currently airing a raft of "classic" situation comedies—everything from The Many Loves of Dobie Gillis, The Honeymooners, and The Beverly Hillbillies, to The Dick Van Dyke Show, M.A.S.H., and Cheers, along with scores of other old TV favorites. Despite the new fall lineup unfolding on every channel, I'd wager to say that where it's really at is on Me. (Or at least that's what Maynard G. Krebs might say.) There were four cases of Sitation*, three apiece of Sitution* and Situaton*, and one of Situatoin* in OhioLINK (with correspondingly larger numbers in WorldCat). Sit yourself down today and check out the situation in your own catalog concerning these classic typos.

(Photo of Les Brown, Jr. and Marlo Thomas on the television program "The Many Loves of Dobie Gillis," from Wikimedia Commons.)