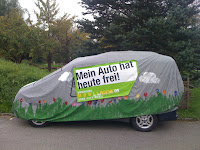 September 22 is World Car-Free Day, a day that "promotes improvement of mass transit, cycling and walking, and the development of communities where jobs are closer to home and where shopping is within walking distance," according to the Washington Post. (And, according to my favorite cyclist and eagle-eyed scout of the "Relative Absolute," who just spotted another egregious example: "By and large, the bike is 100% original.") Melvil Dewey was also a bike aficionado, reportedly supplying each of the women in his library school with one. Speaking as someone who can drive, but prefers not to, I wish every day was Car-Free Day. When it comes to planes, trains, and automobiles, I'll pick taking the train, or better yet, just being a pedestrian. There were only two instances of today's typo in OhioLINK, and 157 in WorldCat. But let's take it one step at a time.