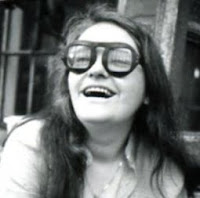 Kate Millett, groundbreaking lesbian-feminist author and political activist, was born on September 14, 1934. Her most famous work (originally her dissertation at Columbia University in 1970) was called Sexual Politics and it was required reading in college women's studies classes at that time. In it Millett compares and contrasts (and basically blasts) D.H. Lawrence, Henry Miller, and Norman Mailer; she also includes Jean Genet in the mix, whom she admires for his less sexist and more minority gay perspective. In 1965, she married the Japanese sculptor Fumio Yoshimuro and later wrote about her marriage, as well as her relationships with other women, in the 1974 book Flying. In 1979, she traveled to Iran to advocate for women's liberation and was predictably deported; she recounts these events in Going to Iran. Millett is also a filmmaker and advocate for the rights of the mentally ill. In The Loony-Bin Trip (1990), she describes her experience in various psychiatric institutions, her diagnosis as bipolar, and her decision to discontinue taking lithium. She and her lawyer singlehandedly changed the state of Minnesota's commitment law and Millett went on to denounce "psychiatric torture" before the United Nations in 2005. She has attracted controversy as well due to her belief in the sexual rights of children. Millett was a contributor to the magazine On the Issues and was interviewed there by Merle Hoffman in 1988. There were 21 cases of Millet + Millett in OhioLINK today, and nine of Kate Millet. (In WorldCat, we got 194 and 125 hits, respectively.)