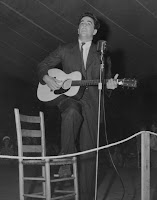 Trad is usually short for the word "traditional" and is often applied to the realm of folk music as a way of distinguishing it from contemporary folk music, although what is currently "contemporary" will eventually become "traditional," it seems. (The difference may also have to do with whether a musician is performing original material or "traditional" material.) Alan Lomax, who was born in 1915 and died in 2002, was an American folklorist and ethnomusicologist, following in the footsteps of his father, John A. Lomax, with whom he started out recording the songs of prisoners and sharecroppers in the Deep South. Lomax was a musician himself, as well as sort of a musical philosopher, contributing theories known as Cantometrics, Choreometrics, and Parlametrics to the academy. However, he really made his mark on the world of folk music by becoming a prodigious "field collector" of both songs and oral histories, ultimately contributing, along with his father and other collaborators, over 10,000 recordings to the Library of Congress, where Lomax was "Assistant in Charge of the Archive of Folk Song" from 1937 to 1942. Among the now-famous musicians he thus conferred archival immortality upon were Lead Belly, Muddy Waters, Jelly Roll Morton, Woody Guthrie, Margaret Barry, Jeannie Robertson, and Harry Cox. There were six cases of Tradmark* (for trademark*) in OhioLINK today, and 62 in WorldCat.