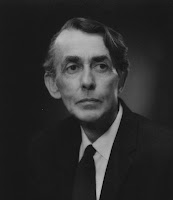 Richard Titmuss (1907–1973) was a British academic and researcher. He established the field known as "Social Administration" (or "Social Policy" as it later came to be called) and held the founding chair in that subject at the London School of Economics. According to his obituary, Titmuss was "fascinated by the problem of making large social service bureaucracies humane and sensitive to individual human need." His most influential work may have been his last, a book entitled The Gift Relationship: From Human Blood to Social Policy. Along with trying to navigate their way through and around the brambles and thickets of actual bureaucracies and bureaucrats, many people also encounter difficulties when attempting to spell these words: one of the commonest blunders is omitting the second U. We Americans do not seem to love our U's as dearly as the English do, at least with respect to words like color (colour), honor (honour), favor (favour), and neighbor (neighbour). And perhaps this is why, once we've maneuvered past those first few vowels (the U, the E, and the A), we wearily find ourselves wanting to skip over that second-in-command U. Don't do it, though—it'll only produce a lot of red tape. Or, at any rate, a lot of red squiggly lines in your word document. There were 22 cases of Bureac* in OhioLINK this morning, and 277 in WorldCat.