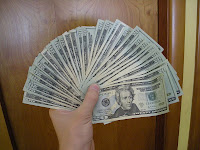 American money is hardly worth the paper (or cotton, actually) it's printed on these days, but we all still crave it like Wall Streeters being punked by Yippies. In a rather less delightful, but perhaps increasingly desperate, bit of street theater, members of the current Younger Generation made a Sixties-style attempt last week to "Occupy Wall Street," while the mainstream media did its level best to ignore them. Although it appears that nobody really understands the "dismal science" (at least, one doesn't need to be right about the economy in order to be an "economist"), the somewhat disoriented demonstrators on Wall Street were subjected to tear gas from the police force and withering sarcasm from the New York Times. There were seven occurrences of today's typo in OhioLINK and 110 in WorldCat. Of the former, one of them proved to be a case of idiomatic spelling: Why Don't You Do Right: Get Me Some Money, Too! Performed by Kansas Joe, and with words and music by Joe McCoy, the first line goes: "You had plenty money nineteen twen'y two." What goes around comes around and nobody ever said it would be easy to "buck" the system. Many happy returns of the day, though, MBR!

(Big "fan" of the double sawbuck, or $620 in twenties, from Wikimedia Commons.)