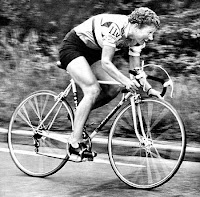 Beryl Burton, the U.K.'s greatest female bicyclist, was born on May 12, 1937, in Leeds, West Yorkshire. As a child, Beryl was beset with chronic health problems, including rheumatic fever, and spent over a year in a convalescent home. She got married in 1955 and her husband, Charlie, introduced her to cycling. Typically Taurean, she stubbornly persisted at it; two years later she took home her first medal, put the pedal to the metal, and never looked back. At the age of thirty, she set a new record for the women's 12-hour time trial, which surpassed the men's record at that time, and she sustained this distinction for the next two years. According to Wikipedia: "While setting the record she caught and passed Mike McNamara who was on his way to setting the men's record at 276.52 miles and winning that year's men's British Best All-Rounder. She is reputed to have given him a liquorice allsort as she passed him. Apparently, McNamara ate the sweet." As if to sweetly press the point even further for the distaff side, in 1982 Beryl and her daughter Denise set a British 10-mile record for women riding a tandem bicycle in 21 minutes and 25 seconds. A couple of other distinctly feminine notes also grace Burton's legacy: a memorial garden in her hometown of Morley; and the "Beryl Burton Cycle Way," which allows cyclists to travel the 2.8 kilometers between Harrogate and Knaresborough without using the A59, considered to be England's most dangerous roadway. There were 11 records in OhioLINK containing the typo Recrod* and 140 in WorldCat.

(Beryl Burton, from the LENOR blog.)