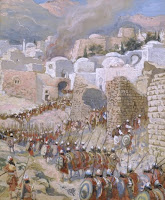 This popular African-American spiritual is thought to date from the first half of the nineteenth century. On the surface, it portrays the fight of Joshua and the Israelites against Canaan, although its alternate meaning is a promised escape from slavery. The song has been recorded by artists as varied as Mahalia Jackson, the Swingle Singers, Elvis Presley, and actor/musician Hugh Laurie.

Batle* is from the low-probability section of the Ballard list. However, an OhioLINK search limited to English will still pull up more than 400 results. Excluding the legitimate surname Batley will bring it down to a more manageable 15 entries in the quest to isolate true instances of today’s typo.

(The Taking of Jericho, by James Jacques Joseph Tissot, from Wikimedia Commons)