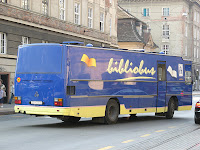 Virtually all eight cases of today's typo found in OhioLINK (and 167 in WorldCat) occurred as part of the phrase "CD-ROM drive," a common enough usage nowadays, although to pre-Internet generations, the word drive had a distinctly different connotation. Someday soon we may find ourselves explaining to befuddled young people that in olden days cars didn't just go: people had to drive them. Christopher Hitchens was reportedly a rather bad driver; this, however, may have simply been a principled refusal to get behind the wheel after a typical night out, given his legendary appetite for alcohol. On the other hand, it seems that he also nursed the rather nice fantasy of tooling around in a bookmobile, driving the library to the patrons, the teeming masses yearning to read free. In his introduction to The Best American Essays 2010, Hitchens writes: "When I was very young I lived in a remote village on the edge of an English moorland. Every week, a mobile library would stop near my house, and I would step up through the back door of a large van to find its carpeted interior lined with bookshelves.... If I live to see retirement, I would quite like to be a driver of such a vehicle, bringing books to eager young readers like a Librarian in the Rye." Christopher Hitchens has now gone on to that Great Bookmobile in the Sky, and we're left down here below to thank and praise him for all the wonderful reading material he's brought us over the years.