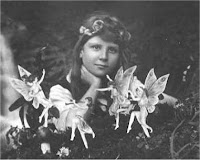 Fairies drink dew. But you knew that, right? And they dwell under toadstools and in various other spots throughout the garden. The herb Lady's Mantle (Alchemilla) collects the morning dew, which when dropped into the eyes is said to enable one to see fairies. Many people believe in fairies, especially those who dwell in the United Kingdom, and this was particularly true in 1917, when two teenage cousins from Cottingley, England, Elsie Wright and Frances Griffiths, managed to convince quite a few folks that they had not only seen, but photographed, fairies. Sir Arthur Conan Doyle famously defended the photographs as genuine and spent years promoting them to the public. The truth is, they were genuine photos, but they were fake fairies. In the early 1980s, the elderly cousins confessed their longstanding deception (the "fairies" were paper dolls hung from branches), although they disagreed about the nature of the fifth picture and jointly maintained that, in any case, they still saw them. I wouldn't dwell on this too much (or maybe I would), but in the meantime, we found three of these typos hiding in plain sight in OhioLINK, and 40 in WorldCat.

(Frances Griffiths with fairies, taken in 1917, first published in 1920 in The Strand Magazine, from Wikipedia.)