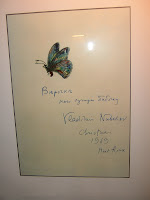 One of my very favorite Christopher Hitchens essays concerns one of my all-time favorite novels, Vladimir Nabokov's Lolita. In an essay, which appeared in the December 2005 Atlantic, Hitchens begins by saying: "In Azar Nafisi's Reading Lolita in Tehran, in which young female students meet in secret with Xeroxed copies of Nabokov's masterpiece on their often chaste and recently chadored laps, it is at first a surprise to discover how unscandalized the women are. Without exception, it turns out, they concur with Vera Nabokov in finding that the chief elements of the story are 'its beauty and pathos'..." Vladimir Nabokov loved language and butterflies. Regarding the former, please turn to Lolita if you've not yet had the exquisite pleasure. As to the latter, Nabokov was also a lepidopterist who identified and named the Karner Blue Butterfly, a species first spotted in Albany's "Pine Bush," a beautiful and dwindling ecosystem comprising pine barrens, lupines, and little blue butterflies. There were 29 cases of today's typo in OhioLINK and 404 in WorldCat.

(Butterfly drawn by Vladimir Nabokov for his wife Vera, "Christmas 1969," from Wikimedia Commons.)