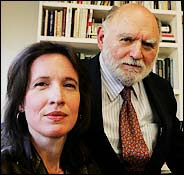 I first became aware of Christopher Hitchens when he began writing for The Nation in the early 1980s. His column appeared side by side with that of his then friend and political comrade Alexander Cockburn. They were the very first things (helpfully arranged on facing pages) that I turned to every week and I'm sure that was true for many Nation readers. Victor Navasky recalls how one day, shortly after hiring him, "around five p.m. a dimpled five-o'clock shadowed face peered through my half-open door, surrounded by a haze of smoke. 'Drink?' asked the deep, richly accented baritone voice that accompanied all of the above. If it is possible in one word to convey an upper-class sensibility attached to a heart ostentatiously identified with the toiling masses, Christopher Hitchens succeeded." Hitchens succeeded at more things than most of us have ever attempted and, though he wasn't able to outwit cancer, his "elegance, wit, and brilliance," as his grieving editor put it, will live on in the hearts of all who knew and admired him. There were eight instances of Natoin* in OhioLINK today and 36 in WorldCat.

(Current and past editors of The Nation, Katrina vanden Heuvel and Victor Navasky, courtesy of the New York Times.)