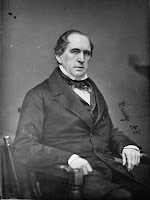 Today is the birthday of Erastus Corning. Which Erastus Corning, you say? The former mayor of Albany, New York? Well, it seems that there were two of those. The original Erastus Corning was born on Dec. 14, 1794. He was elected to office as Albany's mayor and served from 1834 to 1837. A century later, his great-grandson, Erastus Corning 2nd, also became mayor of this fair (?) city, holding onto the job for more than 40 years. (Growing up around here, the words Mayor, Corning, and Democratic Machine were virtually synonymous. His minions—that is to say, the voters—looked upon him as a benevolent despot. I wouldn't exactly say we were railroaded, but I was in college by the time I realized it was actually possible for anyone other than Corning to be mayor.) Unfortunately, I couldn't come up with a good Corning-related typo for the day, but Erastus the elder might just as well have been known as "Mr. Railroad." He was president of the Utica-Schenectady Railroad and a major shareholder and developer of railroads throughout New York State and beyond. Railraod* turned up 13 times in OhioLINK and 289 times in WorldCat. Take a good look today at your own political "machine" in order to rid it of any corruption you might find there.

(Portrait of Erastus Corning, between 1855 and 1865, by either Mathew Brady or Levin C. Handy, from Wikimedia Commons.)