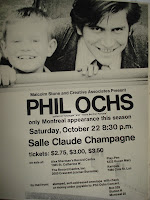 Phil Ochs, whom I blogged about here once before, was born on Dec. 19, 1940, and died on April 9, 1976, at the age of 35. I just watched the 2010 documentary film entitled Phil Ochs: There But for Fortune, which features a few cameo appearances by fellow cultural avatar Christopher Hitchens. Hitchens states that, while it's easy to love Bob Dylan, it takes a special sort of person to appreciate Phil Ochs. I come from a family of "folkies" (folk music aficionados) and was introduced to the music of Phil Ochs when I was a teenager. Like Hitchens, Ochs was an alcoholic and I was well aware that he had died by suicide, however the film made me much more cognizant of his inherited manic-depression along with his deep professional and political disenchantment. Listening to some of his songs as I write this, I am made both melancholy and nostalgic, especially by the words to the unbearably poignant "When I'm Gone." Phil Ochs, much like Christopher Hitchens, was blessed with a truly beautiful voice; both men had the misfortune of losing their voices, to some extent, shortly before their untimely deaths. Long live Phil Ochs and Christopher Hitchens, without whom the Sixties simply would not have been the same. Fotun* was found four times in OhioLINK, and 72 times in WorldCat, although fortunately not all of these are typos. Many of them are, though, so be sure to check your own catalog when you get a chance.

(Poster created for a concert at the Salle Claude Champagne Music School ,Vincent d'Indy, now belonging to the Faculty of Music at the University of Montreal, 1 May 1975, from Wikimedia Commons.)