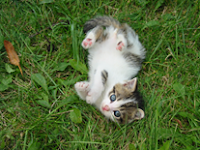 I thought we had all our bases categorically covered with the blog entry from 2007, but I was agog (full of intense interest or excitement) at finding three records containing Catagog* in OhioLINK the other day. More interesting than that, however, was learning the word catagogic, which appeared in one of those records. This is a psychological term of art, as best I can tell, meaning the opposite of anagogic or "elevating." One source defined it as "gutterward." Sounds like where an excitable kitten might be headed if it doesn't watch out.