"I once spent a year in Philadelphia, I think it was on a Sunday," according to W.C. Fields in his second best-known quote about Philadelphia. We also must mention Frank Rizzo's classic explanation: "The streets are safe in Philadelphia, it's only the people that make them unsafe." With the Phillies making a rare appearance at the World Series we were interested in revisiting a city that has been a staple for typo hunters. Phladelphia is found on the Moderate Probability list at Typographical Errors in Library Databases at http://faculty.quinnipiac.edu/libraries/tballard/typoscomplete.html - 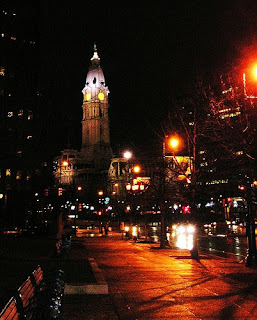 meaning that the error was found between 8 and 15 times in OHIOLINK at the time of its discovery. Large words missing the letter 'i' are the number one feature of our lists, but this is unusual because the missing letter is so close to the beginning. Even the catalog at Penn State had 4 of these - obviously because they own so many titles containing the name Philadelphia. Worldcat shows 42 Phladelphias this morning. If you look at these records you will see that the name is correctly spelled many times in the record which helps to make the typo less visible.
Today's photo shows a night scene in Philadelphia, looking towards City Hall. It was taken earlier this year at the ALA Midwinter meeting. The original can be seen at
http://flickr.com/photos/terryballard/2187812773/
Posted by librarytypos at 7:38 AM