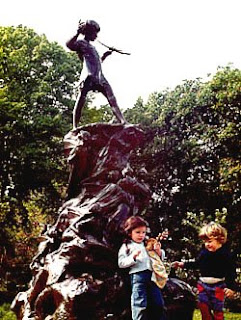 "It's never too late to have a happy childhood" according to Tom Robbins. Chidhood is found in the 'B,' or high probability, section of Typographical Errors in Library Databases, meaning that it was present in at least 16 but no more than 100 records in OhioLINK at the time of its discovery. Curiously, there were only 2 Chidhoods in OhioLINK when we checked today. The original listing had the error with a truncation, but the count held at two, even with the asterisk thrown in. In WorldCat, there are just over 50 hits, making it look more like a moderate probability candidate. We found 23 hits for this in COPAC, the major union catalog for British university libraries. There is even one hit for the typo in the National Library of Australia - not much of a showing but proof that the sun never sets on this typo.

Today's photo shows the statue of Peter Pan at Kensington Gardens in London. This was taken more than 30 years ago, so the children here are presumably nearing their 40th birthdays. The original can be found at http://www.pbase.com/terryballard/image/33784385

Posted by librarytypos at 6:04 AM