"I would rather sit on a pumpkin, and have it all to myself, than be crowded on a velvet cushion," according to Henry David Thoreau. Thoreau has a special connection with this group since a picture of Walden Pond was adapted as the logo for the main page of Typographical Errors in Library Databases at http://faculty.quinnipiac.edu/libraries/tballard/typoscomplete.html . You won't find Pumkin there because we just discovered it yesterday. At that time, 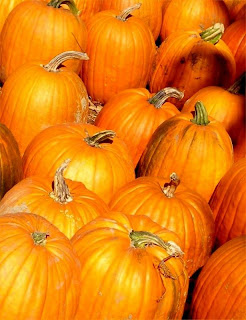 it was found in 11 records in OhioLINK, and one of these was a legitimate proper name. It will appear in the Moderate Probability section of the list, for typos that appear up to 15 times in OhioLINK. Listkeeper Tina Gunther noted that most of those hits are in the notes fields. While notes fields are counted equally in our work, we do note that an error in a title field is the worst sort of typo, as it weakens title and keyword searches.

Today's photo is a closeup of a pumpkin array at a New Hampshire farm stand, keeping up our Autumnal state of mind. The original can be found at:
http://www.pbase.com/terryballard/image/33698578
Posted by librarytypos at 5:32 AM