"When men yield up the privilege of thinking, the last shadow of liberty quits the horizon." This warning came, not from George Orwell, but from Thomas Paine. Libery is a classic typo - a missing 't' near the end of a three syllable word. It's fairly easy to see how it happened and how the proof readers missed it. The error is found on the 'D,' or low probability section of the main list "Typographical Errors in Library Databases at http://faculty.quinnipiac.edu/libraries/tballard/typoscomplete.html, meaning that the typo was found from 2 to 7 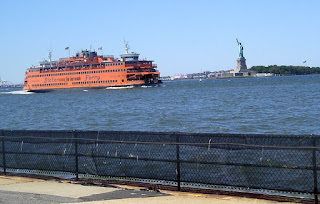 times in OhioLINK at the time of its discovery. This morning, there were 11, which means that it is a candidate for promotion. Words can go up on the list but not down. This is because catalogers in Ohio can read our work and take out typos, so that wouldn't count. If the count goes to the next level it does count.

Today's photo shows the Staten Island Ferry heading for Manhattan with the Statue of Liberty in the background. It was taken last year on Governor's Island. The original can be found at