"Paradise is exactly like where you are right now... only much, much better,” according to Laurie Anderson. Proust said that every paradise is a paradise lost. Pardise exhibits the classic pattern of dropping a vowel in a long word. Like Kathy Griffin, it is on the D list, meaning that it was found between 2 and 7 times in OhioLINK at the time of its discovery. There were more than 30 hits in WorldCat today, including the title "Pardise Palace." We checked Amazon to confirm that the cataloger did misrepresent the first word of the title. For obvious reasons, that is the worst kind of typo to inhabit an online catalog.
Its presence in catalogs represents a team effort with sloppy typing and 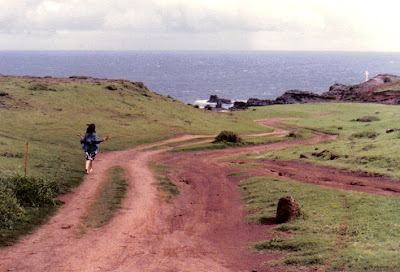 Everyone has their own paradise lost. I lived at Clark Air Base in the Philippines in the late 1950's and this was often cited as a paradise for the children of officers - less so for the children of enlisted men. My own choice would be the island of Maui, so that is today's photograph. The original can be seen at http://www.pbase.com/terryballard/image/77926706
Posted by librarytypos at 6:15 AM