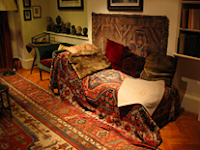 Marshall Brickman's "The Analytic Napkin" (published in The New Yorker in 1975) is a humorous and fanciful account of a rather anal page in psychiatric history. In it Freud is reported to have complained to his mentor: "... how can I keep the back of the patient's chair from becoming so soiled [ganz geschmutzig]? They come in, they put their heads back—one week and already my upholstery has a spot the size of a Sacher Torte." This sticky problem equally occupied the minds of his fellow über-analysts: Jung, Adler, Ferenczi, Klein, Liebner, and "the purist Holtz ... who in 1935 criticized Freud for not being Freudian enough." After a parade of swatches and styles were tried and discarded, a paper company at Mount Sinai came up with "a double-ply, semi-absorbent, bleached-wood-fibre product, with a forty-per-cent rag content and an embossed edge. The response was overwhelming, and the course of psychoanalysis was forever altered." As one doctor putatively put it: "It took seventy years before we perfected the beard and the fee. Now, finally, the napkin. No one need ever be crazy again." There were ten hits for Psychanalysis in OhioLINK and six for Psychanalytic. Very interestingly, psychoanalysis is variously translated into French as either psychanalyse or psychoanalyse, and sometimes even psycoanalyse*. OhioLINK contains 379 instances of psychanalyse* and 405 of psychoanalyse*. In this case, we must analyze each one carefully before recommending treatment.

(Photograph of Freud's sofa by Konstantin Binder, from Wikimedia Commons.)