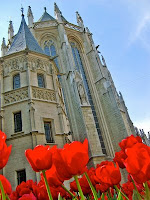 On this day in 1945, the Charter of the United Nations was signed by 50 of the 51 original member states (Poland’s representative signed it later).

Belgium was one of the original signing members of the UN. Making a spelling error such as “Belguim” (a high probability typo on the Ballard list) on a document as important as this one would be most embarrassing—fortunately, this didn’t happen.

Perhaps legitimately embarrassing for Belgium was its inclusion in Life, the Universe, and Everything, the third book in Douglas Adams’ Hitch-hiker’s Guide to the Galaxy series. The U.S. edition of the book was censored, with swear words replaced by such terms as “kneebiter” and “swut”. “Belgium” was also used as a substitute word, and it was described as the most offensive word in the galaxy.

Pictured are tulips in Brussels, photo taken from http://www.travelphotoguide.com/