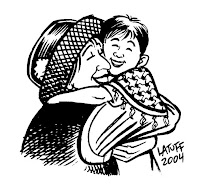 The purpose of a university is to broaden the mind, which hopefully can lead to an opening of the heart. Unvindictive is defined as "forgiving; inclined or able to forgive and show mercy." It is easy to forgive a naughty child, but it's far harder, for example, to show mercy to those responsible for the gas chambers and death camps of World War II. As Portia says in Shakespeare's play The Merchant of Venice: "The quality of mercy is not strain'd..." This means that forgiveness can not be constrained or forced, but must flow freely from the injured party. The drawing to the right is by Carlos Latuff, a political cartoonist born in 1968 and currently living in Rio de Janeiro. Latuff is the second-prize winner of the International Holocaust Cartoon Competition organized by a Tehran-based Iranian daily.