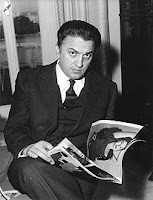 There are 55 examples of Shiek in OhioLINK (and five of Shieks), making this one more exception to the shaky "I before E..." rule. Most of these records reference the song "The Sheik of Araby"; some contain [sic] or [i.e.]; a few appear to be personal names. Lo sceicco bianco or The White Sheik was an early Fellini film made in 1952. According to Wikipedia: "The male lead, Leopoldo Trieste, a playwright who did not consider himself an actor, reluctantly auditioned for Fellini. During the audition Fellini asked him to compose a sonnet that the lead character would have written to his wife. The poem which begins 'She is graceful, sweet and teeny...' was included in the film." Today's typo is none of those things, but you don't have to be an actor to play a big part in eradicating it.