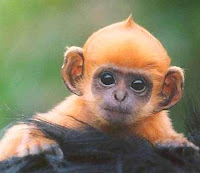 With 22 hits in OhioLINK on Lanuga*, this typo for language* shows up in the B or "high probability" section of the Ballard list. It turns out that lanuga actually is a word in Esperanto, meaning "covered with fine hairs or fluffy." Esperanto was conceived in the late 19th century by Dr. Ludociv Lazarus Zamenhof, a Jewish ophthalmologist from Bialystok, Russia, and was created to help promote global harmony and understanding. It is currently spoken by an estimated two million people worldwide, although at one time speakers of the language were persecuted by both Hitler and Stalin. Surprisingly enough, none of the typos we found were for Laguna Beach in southern California, another locus of love and peace, and former haven for those who like it long, straight, curly, fuzzy ... hair!

(Picture of baby Ginger Monkey, all orange and lanuga and looking as if it might start speaking Esperanto any minute, taken by "Rob" in Cambridge, Massachusetts, from Wikimedia Commons.)