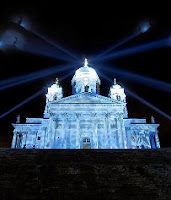 This typo for the capital city of Finland, Helsinki, is a high probability error on the Ballard List, and there are over 450 occurrences of Helsinski in Worldcat!

It’s not unfitting that Helsinki is a frequently misspelled name, since the city actually has its own slang which does not conform to normal Finnish spelling and grammar rules.

This slangi is a mishmash of colloquial Finnish and words borrowed from other languages: English, Swedish, German and Russian.

Slangi is characterized by a very quick speech, shortened or diminutive forms of words, voiced consonants not commonly used in Finnish, such as d, and a breaking of the rules of vowel harmony.

Often, an extra S is added to the beginning of words in slangi—this would not, however, justify that extra S near the end of our typo Helsinkski!

Pictured above is the Helsinki Cathedral, a major landmark in the city.

(Photograph from http://taivasalla.net)
Leanne Olson
Posted by librarytypos at 5:00 AM