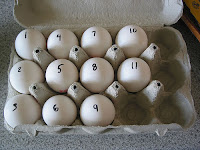 Milo Minderbinder, from Joseph Heller’s Catch-22, is a particularly loathsome character. WWII mess hall officer Milo began his capitalist ventures by selling eggs to the army for a tidy profit, and moved on to double dealing with American and German armies. This resulted in the bombing of Milo’s own squadron and the deaths of his fellow soldiers. Moreover, Milo didn't draw the line at selling the army's supplies. During a bombing raid, Yossarian searches for morphine to ease the pain of a mortally wounded soldier. He finds no Syrettes in the morphine kit, only the note “What is good for M & M Enterprises is good for the country”, a parody of General Motors President Charles Wilson’s misquoted statement “What is good for GM is good for the country.”

Loathesome appears 3 times in OhioLINK, placing in the low probability category on the Ballard List.