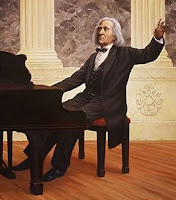 The boatman in his small craft
Is seized with longings, and sighs.
He sees not the rocks fore and aft;
He looks only up towards the skies.

I fear that the waves shall be flinging
Both vessel and man to their end;
That must have been what with her singing
The Lorelei did intend.

- translation of verses from Heine's Die Lorelei,
set to music by Franz Liszt
Franz Liszt (1811-1886) was a Hungarian composer, pianist, and educator, one of the leaders of the Romantic movement. He also had a rather difficult name to spell: the typo Lizst occurs over a hundred times in Worldcat.

Liszt was known for his piano works and his virtuosity at the instrument, but his song compositions should not be overlooked. He paid strong attention to interpreting the words of the poems and the emotion therein.

According to Grove Music Online, he wrote notes throughout his manuscripts with instructions to the singer such as “‘fast gesprochen’ (almost spoken), ‘mit halber Stimme’ (with a half-voice), ‘geheimnisvoll’ (mysterious), ‘phlegmatisch’ (dull or heavy) and ‘hintraumend’ (day-dreaming).”

(image of Liszt from pianoparadise.com)
Leanne Olson
Posted by librarytypos at 5:00 AM