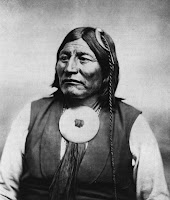 Cheif* appears 168 times in OhioLINK, Cheif 51 times, and Cheifly 20 times. (Caveat: Punk band The Cheifs apparently spells it just so.) While scouting out a picture to go with today's typo, I felt "chiefly ill" to read about the Comanche chief known as "Shaking Hand" and the U.S. Army assault upon his people under Colonel Ranald S. MacKenzie. (One can't help but wonder if Shaking Hand was called that because he was a peace-pipe-passing glad-hander or because he was beset by fears and tremors. Or perhaps it was for another reason entirely: his son claimed that the name, which might be better translated as "push aside," referred to the time his father used a hunting knife to kill a bear who had mauled his companion.) If your hand shakes, you'll want to keep an eye on your e's and i's and make certain all your circles are carefully drawn. Wagons were drawn in a circle on Sept. 20, 1872, during the massacre of an Indian village near San Antonio, Texas. After nightfall, the natives charged their captors and stampeded the horses, freeing Shaking Hand and some others—but at least fifty villagers were killed and 130 women and children taken prisoner. A white captive at the time, Clinton L. Smith, later described the bloody attack, writing: "After what I had seen that day I was mad all over, and was willing to risk anything to get even with the soldiers..."

(Mo'o-wai, aka Shaking Hand, chief of the Kotsoteka, circa 1874, photographed by William S. Soule, from Wikimedia Commons.)