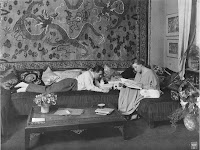 This typo turns up an amazing 898 times in OhioLINK today. Undoubtedly, some of these are correctly spelled foreign words or trade names, while others are misspellings on the piece itself. Filmmaker and its ilk are very commonly misspelled words, in which one M is mistakenly substituted for the two M's the words actually should contain. German filmmaker Fritz Lang is largely known for Metropolis, the most expensive silent feature ever made at the time of its release, and the thriller M, which was his first sound movie and the one he considered his best. Although Lang denied the connection, M was thought to be based upon the case of Peter Kürten, the "Vampire of Düsseldorf." According to Wikipedia: "A police psychiatrist in the film cites serial killers Fritz Haarmann and Karl Grossmann as examples of how such criminals can conceal themselves in everyday society." Double letters are not concealed in those two surnames and in fact show up in a great many German and English words. Don't let the two M's in filmmaker and its relatives get away from you; you're sure to catch a least of few of them in your own catalog. Although in the case of transcribed fields, you'll probably have to do some additional investigative work.

(Fritz Lang and his wife Thea von Harbou in their Berlin apartment, 1923 or 1924, from Wikimedia Commons.)