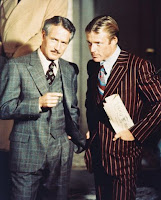 Social engineering is the practice of gaining someone’s trust to illicitly obtain information. Hackers pretend to be someone else--maintenance men, co-workers, and people of authority. They use tactics such as intimidation or acting helpless to persuade others to give them passwords and other sensitive information. An example of social engineering would be a hacker finding a company phone book in a Dumpster, then calling the computer department posing as a higher-up and asking for a password. Of course, this is a really simplified plan, but if a hacker has collected sensitive information about a company over time, then it would be easier to make the illusion complete. In short, it is in a company or library’s best interest to think outside the box about security measures.

The phrase Security mesures produces 4 hits in OhioLink, placing it in the Low Probability section of the Ballard List.

(still image from the film The Sting from Google Images)

I really like your perspective in writing, especially when you compare the subtle nuances between mesures and measures.

I want to invite you to write a blog on our website, SoundOffToAmerica. It is a forum for open discussion, without the guidance of a moderator or any political leaning. Your voice is one that our readers would really benefit from. Also, feel free to include a link back to librarytypos.com which as you know will promote SEO for your website.

Thanks very much for your time. I look forward to reading your comments on www.SoundOffToAmerica.com.

these are really neat! keep it up.

Let's not forget Kevin Mitnick here and his book The Art of Deception.

I won't be going through commenting on every post, but I have had a quick look through and it is amazing some of the typos that occur on an every day basis, almost so frequently that we don't even read them as typos.

I will try to make sure I don't make any sill typos on my site Oes Tsetnoc or on my blog at http://www.oes-tsetnoc-oes.blogspot.com

I used to be a quality control palte checker for a paperback book manufacturer. I would often see typos on the huge aluminum plates that had the pages burned onto the coated plates. I guess this typo hunting is just something you do to relieve boredom? May it's an OCD thing? For years even after I quit that job I managed to see all the flaws in whatever thing I looked at.