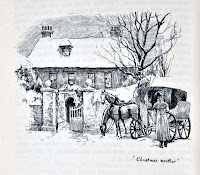 According to AustenProse, one of the most outstanding illustrators of Jane Austen's oeuvre was a young woman named Christiana Hammond. Like Austen a century before her, "Chris" Hammond never married and tragically died quite young. She was, however, well educated and classically trained. An artist of considerable renown (she illustrated Jane Austen's Sense & Sensibility, Pride & Prejudice, and Emma, along with assorted works by Thackery, Mrs. Gaskell, George Elliot, Oliver Goldsmith, and Maria Edgeworth), she went by a shortened form of her Christian name in order to maximize her chances for success in a Victorian man's world. We found 24 cases of Chrismas (for Christmas) in OhioLINK, only a handful of which look like they might be personal names or antiquated variants.