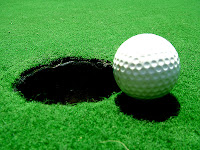 Score one for common sense! Recently, the New York State Court of Appeals ruled against a neuroradiologist who sued his golfing buddy after being partially blinded by an errant ball. The plaintiff maintained his companion should have shouted the traditional “Fore!” to warn him, but in a ruling similar to that from a 2007 California legal case, the New York court rejected the plaintiff’s claim. It declared the defendant was not responsible because 1) the victim was never in the intended path of the ball, and 2) the plaintiff assumed the risk of possible injury when he decided to play golf in the first place.

Leagal is billed as a low-probability error, but right now there are 9 English-language results in OhioLink and one additional hit for an English-language note. Correcting such typos in your own catalog would be the right thing to do, but at least no one will sue you for negligence if you don’t.