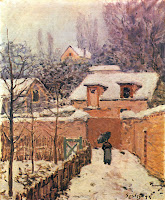 Alfred Sisley was one of the lesser known Impressionist painters of the 19th century. Despite the fact that he is sometimes damned with faint praise by critics who regard his style as having "almost a generic character, an impersonal textbook idea of a perfect Impressionist painting" (in the words of art historian Robert Rosenblum), Sisley did occasionally deviate from form, at least a little bit. I especially like the picture entitled Flussufer (Riverside), which I think would look great in a children's book. (And that's not damning with faint praise.) We found a dozen examples of Inpress* (for impress*) buried deep within the OhioLINK database on this cold wintry morning (approximately half of which were foreign words of uncertain spelling).

(Garden in Louveciennes in the Snow, Alfred Sisley, 1874, from Wikimedia Commons.)