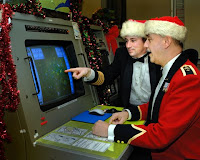 December 24th, 1955, was the first night of a Christmas tradition: when NORAD (North American Aerospace Defense Command) began to track the air travel of Santa Claus and his reindeer.

The story is particularly germane to this blog because it began with a simple typo: an incorrect phone number in a Colorado Springs newspaper inviting kids to call and say hi to Santa. Instead, the children reached the Continental Air Defense Command Operations Center (NORAD’s predecessor). Quick-thinking Colonel Harry Shoup instructed his team members to respond to the calls by locating Santa on their radar and reporting the location to the thrilled children. And so a tradition began.

Now, each year kids can track Santa’s whereabouts in seven languages by email or phone, on NORAD’s website (http://www.noradsanta.org/) or through various social networking sites including Facebook, and Twitter.