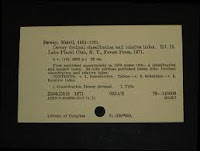 Y scream, U scream, we all scream for Ys cream? Melville Louis Kossuth Dewey (who was otherwise known as Melvil Dewey—or, better yet, Dui) was born on this day in 1851. And if he were still with us today, he'd probably be calling for the traditional birthday fare, even while insisting that it be spelled "cak and ys cream." Librarians are taught to pay particular attention to the way words are spelled, but if we'd had Melvil Dewey as a teacher (he was head librarian at Columbia University where he established the nation's first library school; director of the New York State Library and founder of the New York Library Association; and secretary and executive officer of the New York State Education Dept.), he'd be actively encouraging us to misspell virtually every word we could. However, there was clearly a method to Melvil's madness. Dewey was a big fan of simplification and standardization and promoted the adoption of both the metric system and a form of phonics known as simplified spelling (along with other such notables as Andrew Carnegie, Theodore Roosevelt, and George Bernard Shaw). While this idea never quite caught on the way these guys had hoped it would, an article in the Minneapolis Star Tribune points out that they might nevertheless have been heartened by the popularity of tweeting and text messaging a hundred years later. Dewey was also the founder of the Lake Placid Club, where many adventurous teachers and librarians celebrated their birthdays and other happy occasions. A menu from September 1927 features the following dishes: "Hadok, Poted beef with noodls, Parsli or Masht potato, Butr, Steamd rys, Letis, and Ys cream." There were only two instances of our typo du jour in the OhioLINK catalog; coincidentally enough, both had to do with spelling reform, yet were clearly unintentional: "In Mandarin with siplified Chinese subtitles" and "Siplified Spelling Society."

Carol Reid
Posted by librarytypos at 11:30 AM