The first thing I turn to in the newspaper (not newsaper) is the crossword puzzle. It’s hard to imagine that less than 100 years ago, papers didn't include crosswords at all.

On this day (December 21) in 1913, the first English language crossword puzzle was published, in the New York World. You can actually see the puzzle on the American Crossword Puzzle Tournament’s website (scroll down).

There are many different styles of crossword puzzles out there, with the North American (pictured above), British, and Japanese puzzles all appearing fairly similar, though varying on the number of black squares and arrangement of the latticework.

I find the Swedish-style crossword to be the most interesting, as it contains clues within the squares, and no black squares at all. An example can be seen below, or larger on Wikipedia. 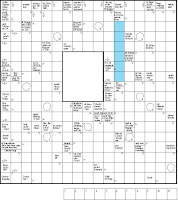