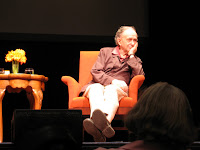 A great many Americans are out of work right now (around a dozen employees or so were recently laid off at my own library) and things aren't looking to get better any time soon. President Obama just made a deal with the Devil (or rather, the Republican Congress) in which he agreed to permanent tax breaks for the rich in exchange for temporary jobless benefits for the poor. It isn't fair, but there may come a time when We (the people) will all be on welfare. Actually, there are several kinds of "welfare," according to Wikipedia, including Corporate welfare and the title of a 1975 documentary by Frederick Wiseman. We documented eight cases of Wefare (for welfare) in OhioLINK this morning.

(An evening with Frederick Wiseman, 13 June 2005, by Charles Haynes, from Wikimedia Commons.)