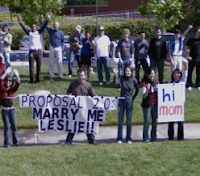 In some Western countries, betrothal was a binding contract between a man and a woman promising to get married, involving dowry and formal declarations. Nowadays, the emphasis seems less on the formal statement and more on romance.

A Google employee by the name of Michael Weiss-Malik embraced the romance in his 2008 proposal to his girlfriend, Leslie. He popped the question in a Web 2.0 version of the public skywriting or Jumbotron proposal: Weiss-Malik used Google Street View, a feature of the online Google Maps in which a photograph is displayed of locations on the map.

Weiss-Malik learned from fellow employees when the Google Street View van would be driving by to take photographs, and positioned himself outside holding a sign that read “Proposal 2.0: Marry Me Leslie.”

(Image of Michael’s proposal from the LA Times.)