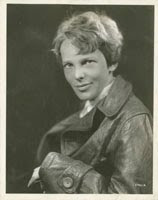 On January 11, 1935, Amelia Earhart began a flight from Honolulu, Hawaii, to Oakland, California. The successful completion made her the first woman to fly across the Pacific Ocean solo, and the first person to complete this particular flight path.

Earhart disappeared in 1937 while attempting to circumnavigate the globe with her navigator, Fred Noonan. She was declared legally dead in 1939 and what happened to her remains a mystery.

Hawii* is a moderate probability typo for Hawaii*, showing up over 600 times in WorldCat. But watch out: some of these appearances are actually the surname Ḥāwī.

(Photo of Earhart from Purdue University, where she was a faculty member.)