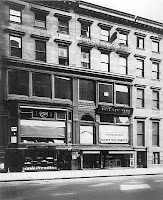 According to Wikipedia, the word gallery has numerous meanings and applications. Generally speaking, however, it refers to a room usually used for viewing art, scenery, or performances. It can also describe the people inhabiting such a room, for example, a peanut gallery, which is "an audience that heckles performers." (It's also the name of a band, a song, an album, a disco, a magazine, a fanzine, a hotel, a mall, a cafeteria, etc.—a whole gallery of possibilities.) There were eight examples of Gallary and four of Galleries in OhioLINK today (plus 106 and 55 in WorldCat). Don't let it gall you, but do remove these typos from display at your earliest convenience.

(The Alfred Stieglitz gallery at 291 Fifth Ave., NYC, before 1913, from Wikimedia Commons.)