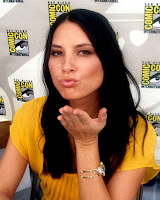 Comedian (or, should you prefer, comedienne) Olivia Munn garnered the plum position of Daily Show correspondent last year, which brought down the wrath of at least a portion of the feminist community. Some women felt she wasn't funny enough, while others suspected she may have gotten there on her looks. (Come on, says Munn, in the Wall Street Journal—the two things don't have to be mutually exclusive.) Feminists have always battled the perception that they lack wit and humor, not to mention the fact that men are not traditionally attracted to funny in a female. Even the great (and hilarious) Christopher Hitchens felt the need to pile on this way in Vanity Fair a few years back. There were eight examples of Communn* in OhioLINK (though the two cases of communn among them, one in French and the other Gaelic, I shall leave to my more foreign-language-fluent colleagues to figure out). Furthermore, WorldCat contained a whopping 225 iterations of this typo. And that's not funny!

(Olivia Munn at the 2007 Comic-Con, from Wikimedia Commons.)